The Wool Journey Part 8: all clean and tidy!

The Wool Journey Part 8: all clean and tidy!

Scouring and drying: the first stage of processing

We are starting with wool, mohair or alpaca (or indeed cashmere) which has already been sorted and graded and is therefore a pile of similar or mixed fibres ready to be transformed into felt or a yarn.

Cashmere may have been treated with formaldehyde to prevent any risk of the spread of anthrax, which is endemic in most areas where cashmere is produced in quantity and is a requirement of the World Health Organisation.  This means that most cashmere at present cannot be used for organic products, however, scouring will have removed this before further processing, so it is an environmental rather than material issue for organic acceptance.

Scouring is the traditional name for cleaning wools: it is a bit more aggressive than washing as it needs to separate dirt, sweat (called suint in the wool industry) and grease (also called lanolin) from fine fibres.  However, it must also not damage the fibre too much or cause it to felt.  So there is a tricky balancing act to maintain quality.

Smaller scale washing and scouring can be achieved by hand or by fermentation, and we have a downloadable set of instructions on The Natural Fibre Company website for washing individual fleeces, drying and teasing them to prepare them for carding.   See also Beth Smith’s excellent blog item.

It is of course possible to spin wool “in the grease”, which is almost always done in the back-to-back fleece to pullover competitions.  The picture below is of the current world champion team at back-to-back processing from a shorn fleece to a garment, who are in the Guiness Book of Records for their achievement, and who include Elisabth Gutschow, a Blacker yYarns stockist and Natural Fibre Company customer amongst their number!  Elisabeth is standing, second from the left and their impressive time is above them. 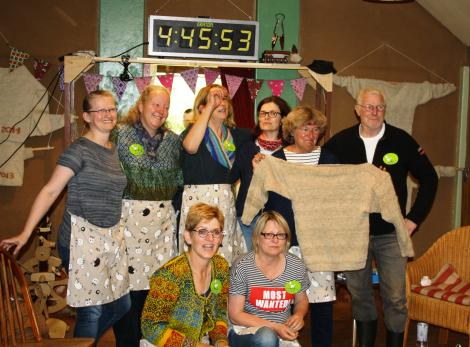 However, while the sensation of a more direct and arguably more natural process may be quite nice for some, there are potential problems with the resulting yarns: principally once the fibres have been twisted together it is harder to remove dirt, but also because the fibres are still dirty and greasy it is harder to make a completely even and strong yarn. So scouring first is generally preferable.

In 2015, the France-based ATELIER wool industry federation of a wide range of stakeholders from across Europe held a conference to look at scouring as increased regulation and other costs are threatening the future of many smaller plants.  The conference report, in both English and French, provides an overview of the scouring provision in Europe, with maps and also reports on potential new technologies, as well as summarising the regulations.

The main large-scale scouring machine, used worldwide, is the Leviathan (sic!), designed to remove the most dirt and grease, with the least damage and using the least water and detergent.  Leviathans consist of a series of “bowls”, or tanks, through which the fibre is successively passed, starting by dissolving out the lanolin and dirt at 65 degrees.  Lanolin actually dissolves at around 45 degrees but the additional heat enables it and dirt to be removed more efficiently.  After each bowl comes a pair of large squeeze rollers, like a giant mangle, which remove the dirty water into side tanks before the fibre is passed into the next bowl.  The design of the machine enables dirty water from side tanks to be re-circulated from cleaner to dirtier bowls to make the most use of it before pumping away.  The leading manufacturer is Andar of New Zealand.  The following pictures are from their website and illustrate large-scale scouring machines and the second one shows bales of wool in the foreground.

Larger scale scouring systems may have 8 or more bowls and the smallest have 3.  The fibre goes through three stages: wetting, washing and then rinsing before it is ready to be dried.  There are two major scouring operations in the UK, Haworth Scouring in Bradford and Chadwick in Dewsbury, both organically accredited.  In addition, there are several smaller or in-house scouring operators associated with spinning mills.  Elsewhere in Europe, the main contract scouring is done by Traitex in Belgium or at facilities at Biella in northern Italy.

The following two pictures show a schematic of the process and flow of water against the direction of the wool being scoured, and the squeeze rollers.

Apart from water, and managing the pH to make the washing efficient with a protein fibre, vegetable-based detergents with the minimum environmental impact are used.

The effluent from scouring is very high in nutrients useful for the soil, mainly nitrogen based, but unfortunately may also contain pesticide residues from anti-flystrike or other external treatments used on the animals and nowadays the chemicals of choice (synthetic pyrethrins) are poisonous to fish and algae.  So there are several options:

Clearly, it is very important to control all of this carefully, to make the most use of the effluent and ensure it causes the least harm.  All of the options have pro’s and con’s and a fuller description of the current state of play across Europe is contained in the report from ATELIER referenced above and prepared following the pan European conference on scouring in 2015.  The Haworth scouring plant is shown below.

Drying the wool, even after most of the water has been removed in squeeze rollers, is potentially a big risk for felting, especially for finer fibres.

The least damage will be caused by the traditional method of spreading out to dry in the sunlight (slight risk of yellowing on wool) or a covered area.  Cover is preferable as it will stop wind and birds from having an effect!  However, this is quite slow, needs a large space and also needs regular turning of the fibre to ensure it is all dried.

Mechanical means such as gentle and short tumble drying are possible for coarse, medium and most fine wools, mohair and alpaca.  Finer alpaca, kid mohair and cashmere are likely to be damaged by this process so need air drying for small quantities.

Larger scale operations can use warm air heating tunnels through which the fibre is passed on conveyors or radio frequency dryers.  Both of these take space and energy and are more suited to large homogenous batches of fibre.  Radio frequency must also avoid the risk of any oddments of metal left in the wool, which will stop the machine very effectively!

After drying, the scouring plants will toss the wool and leave it to rest and settle so that its natural memory and style will return after the shock of washing.  Once tossed, it can be baled for storage or transport, or taken on directly for further processes such as stock dyeing (dyeing in the wool) or top-making in preparation for worsted spinning.

Once made into tops, wool may also be carbonised or superwash treated:

As both these treatments use more energy and potentially increase environmental impact of wool processing, The Natural Fibre Company and Blacker Yarns do not use them at the mill in Cornwall.  Further processing, particularly the peralta roller at the end of the first part of the carding machine and the worsted comb, is able to remove vegetation pretty effectively, while modern washing machines can now wash wool gently without felting or shrinkage.

Finally here are pictures of our very own scouring machine in Cornwall!  You can also see it in operation in our film.