Now we have a pile of evenly organised fluff: clean, blended and oiled so that it will go through the next machines.

At a small scale, the clean fibre can be processed by hand using hand carders or a drum carder, with or without a small electric motor and also combed by hand using heavy worsted combs or the type of combs used to groom dogs and cats.  There are even nice electrically driven spinning wheels!  However, at The Natural Fibre Company we start with traditional large carding machines, which have not changed much in structure since they were invented in the second half of the eighteenth century by Lewis Paul and later also patented in various forms by Richard Arkwright and Samuel Crompton.

The above pictures are of hand carders made by Ashford, from The Threshing Barn and drum carders fromThe Classic Carder in Staffordshire.

Our machines are around 40 feet long and 60 inches wide (being Imperial machines!).  In metric, they are around 14 metres long and 2 metres wide. Ours are probably at least 80 years old, which is quite typical, as apart from the iron frame most of the parts are replaceable.  When the wire covering the rollers wears out the machine can be re-clothed, and all the belts, gears, chains and sprockets can also be replaced, along with the small electric motors which drive the various sections. 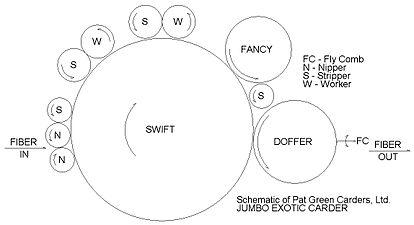 The above is a simple schematic of a single swift carder from Pat Green Carders Ltd.

The Card for woollen spinning

Above is the feed hopper and micro-weigh along with the first rollers, where the micro-weigh can be used to set yarn specification.

A Carding machine consists of a series of parts:

Above are the condenser and final preparation of bobbins of carded fibre for woollen spinning.

The Card for worsted spinning and other things besides …

For worsted spinning, the fibre only goes through the Scribbler and Peralta and is then fed into a can or tub by means of a can coiling machine.

It is at this stage that the paths to the end product diverge:

To make a worsted spun yarn, the can coiled rovings now travel through a series of further machines which refine and prepare the fibre for the worsted spinning frame.

At The Natural Fibre Company, we work through: 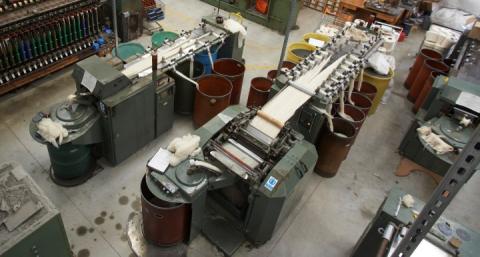 As you can see, the machines are all quite similar in appearance although they have different functions, and are the most usually found nowadays – the older-style Noble combs are very beautiful but much less used as they are more difficult to manage.  One part of the gills is an item called the Ambler Superdraft, which was invented by an ancestor of Sue Blacker, whose maternal grandmother was an Ambler.  Above are in order from the left the first gill, comb and second gill.

By passing the fibre through these machines, it is produced to a constant weight per metre and therefore thickness, so that when it reaches the spinning frame it will be able to spun to the required thickness or yarn specification.  Fibre can enter the process at this stage as “tops” which are combed and gilled rovings, already prepared for setting the specification and spinning by specialist businesses called “top-makers”.  Indeed much of the spinning industry is specialised, with dedicated scourers, blenders, top-makers, spinners, and then finishers so The Natural Fibre Company is unique in doing all of these processes under a single roof.

Through these processes it is also possible to add coloured fibre to white or to add other fibre such as nylon for sock yarns by combining the flows of rovings as they pass through the gills.  It is also possible to re-comb to remove more coarse or short fibre, although of course this will reduce the resulting quantity of yarn.  Be;pw are combed tops ready for bi-coiling and spinning.

For more information on worsted and woollen spun yarns and their characteristics, see our Information Sheet.  There is also an earlier blog item on carding, to be found with this link.

PrevPreviousTimely tutorial: skirting a fleece ready for spinning or felt-making
NextA bit of background: the evolution of our Birthday yarn design ideasNext