This is one of my favourite recipes because it is quick to prepare, fairly quick to cook, tasty and sufficiently impressive to serve to visitors.

If you start by putting a few scrubbed unpeeled potatoes in the over set at 160 degrees (fan oven), 170 degrees (non fan) or Gas Mark 4, there’s almost no washing up and the nice jacket potatoes will be ready when the meat and leeks are cooked, with plenty of fluffy potato to soak up the meat and vegetable juices.

If you use purchased lamb fillets from a “normal” butcher, the cooking time to get them tender is probably around 40 minutes, but if you use a heritage breed or hogget, or mutton, you will need to increase the cooking time.  This is a pretty forgiving dish which can be cooked, possibly safer at 150 degrees (scale down for non fan and gas proportionately) for an hour and a half or even more without damage.  The shorter cooking times will leave the fillets pink in the middle and possibly slightly chewy while longer times will take it through tender to mouth-watering falling apart …

Start with 2 neck fillets (will serve 4 people – add more if you need!).

Use about 2 tablespoons full of your preferred cooking oil, and add seasoning. 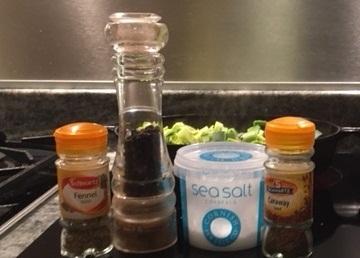 I use salt, black pepper, fennel and caraway seed, plus some chili flakes, and this will work very well with the Ricard added later …  Other options are rosemary with gin or cumin, ginger and whiskey … or whatever takes your fancy!  Because the lamb will be quite greasy it’s worth limiting the oil and then also using sufficient seasoning to add flavour without drowning the taste of the meat and leeks – i regret to say that I do this by estimate and how I feel on the day, but probably around a teaspoon of each would work.

Fry the fillets until browned in a shallow casserole and set aside.

While the meat is browning, take some washed, trimmed leeks, probably around 3-4 medium-sized leeks and chop to around 0.5-1cm chunks – fatter leeks are better split down the middle before chopping.

Add garlic, to taste, and put the lot into the casserole on top of the seasoned meat juices and fry till bright green and softened but not really cooked.

Now place the browned fillets on top of the leeks, slosh in a slug of Ricard, cover and put into the oven.

Of course you don’t need to add chili or alcohol unless you want to and the dish will work fine without!

The cooking time should be 40 minutes to 1.5 hours but is pretty flexible.  The longer the meat is cooked, the more it will shrink and the more the juices and leeks will merge into a soft mushy sauce.  It you plan to cook for a long time, you may consider a further vegetable, depending on what is in season, to go alongside the jacket potatoes.

To serve, take the meat out and slice into rounds – approximately half a fillet per person, set on plates and spoon the leeks over the top.