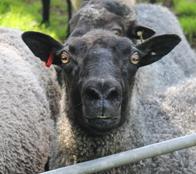 Not just a pretty face, Harry added loads of value to my life!

He was a bottle-fed, home-reared lamb who travelled to work when on four-hourly feeds and eventually reluctantly accepted that he was really a sheep and lived with the others for eight years until his life became of insufficient quality and the knacker-man came for him.

During his eight years, apart from beind a great ambassador for sheep in general, cheering up the vet by investigating the inside of his car, annoying the shearer by chewing or even disconnecting the cable to the battery, and helping manage the rest of the flock, he contributed two fleeces a year, appproximately 30kg of good quality wool, worth around £120.  As he was special, and somewhat old, he did not contribute meat or a skin.

There are five key crops from sheep, goats and alpacas, which is much more than from most domesticated animals, and which enables them to be important contributors to added value and the environment.

– MEAT, which is the primary purpose of most European sheep, and is also growing in popularity from goats and beginning to be used from alpacas

Meat from sheep and goats is particularly valueable, because most of them produce it pretty much entirely from grass, without very much additional feeding, particularly compared to pork, beef or chicken.  Secondly and because of the low additional inputs, the meat generally contains fewer pesticides and anti-biotics.  It is also, especially from rare breeds, low in fat content.  Unlike other animals, neither sheep nor goats are seen as sacred, and they are not as risky from the point of view of food poisoning as pork and chicken.  So it is scarcely surprising that as Europe urbanised, with England in the vanguard, Robert Bakewell “improved” the Leicester sheep to make it larger and more productive for meat.  In the process, he did not do much good to wool quality!  So it’s best to buy British Lamb, as the high welfare and low distance travelled make it not just good for you but good for all of us!  Se the ADHB (Agircultural and Horticultural Development Board) Beef and Lamb site to understand the best way of producing great meat.

– WOOL AND HAIR FIBRE, which is the primary purpose of most Australian sheep, a bi-product of  most European sheep, an important crop from goats and the main crop from alpacas 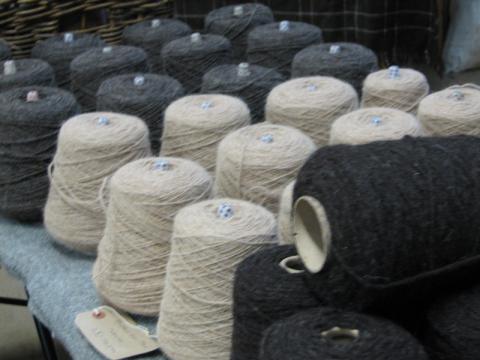 Wool and hairs are generally made into either yarns, as above, and also felt.  Even the rejected short and dirty fibre can be used for felting or as a mulch.  A version of felt is also of course, insulation and this is growing in importance.  Until the advent of sheep meat to feed the cities, sheep were kept primarily to produce a few lambs, milk for cheese and above all for their wool.  Only really old ewes would be eaten as the wool was so valuable.  The softness, warmth and elasticity of wool, together with its fire retardant, ulta-violet resistant and moisture wicking qualities still make it the most high performance fibre known.  Today, these qualities unique to wools mean the best, most durable and most stylish garments and furnishing textiles as made of or contain wool.

– MILK, which is growing in importance from both sheep and goats, and is particularly used for cheeses, but also as a drink or for yogurt, especially for people with allergies

These two pictures of Cornsh goat cheeses come from the Hanson Fine Foods website, which specialises in Cornish cheeses of all types.  The milk from goats is highly regarded as less likely to cause allergies than cows’ milk. Sheep cheeses are also useful and Wikipedia has an impressive list, including the famous Roquefort, Pecorino and Feta, plus many great English cheeses, including Tickelmore Beenleigh Blue, where the sheep also send their wool to The Natural Fibre Company for Beenleigh Blue blankets.

– SKINS, which are the bi-product of meat, and are used for rugs, footwear, clothing and accessories from sheep, goats and alpacas 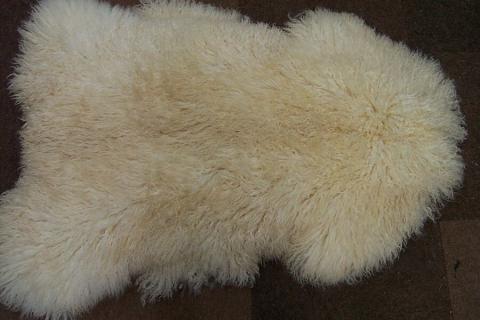 Sheepskins are wonderfully luxurious and good value.  They are hard wearing as well – almost the perfect combination.  The tanning process is complex and, historically, very smelly!  As with the first stage of processing for wools, the effluents need careful management to ensure that their nutrient content can be useful.  This picture comes from Nicky Port’s website, and she specialises in low environmental impact organic processing.

– land management, which is the b-product of all of the above and is very helpful due to the way in which these animals eat and spread dung.

Sheep and goats will browse weeds and hedges (sometimes too much!) and are very useful in tidying up the land to follow catlle and horses.  the sheep in the picture are Shetlands from the Shetland Sheep Society website article on their use in conservation graaing.  Sheep and goats are frequently used for conservation grazing by the Wildlife Trusts and The National Trust.  There are no docks in fields managed by sheep, nor, sadly many blackberries in the hedges!  They are, unfortunately, less keen on thistles, though they will carefully pick and eat some of the flowers.  Sheep of the Shropshire breed are uniquely useful in not eating trees and woody material and can be used to manage woodlands.  Using sheep as part of mixed farming also helps reduce chemical inputs, as the parasites which prey on sheep differ from those for cows, so they each clean the pasture by following in rotation leaving sufficient time for the pest life-cycles to be broken.

At The Natural Fibre Company, we of course specialise in products from wool and hair.  Nevertheless, we recognise these other values of ovids, caprines and camelids.  And, given the sums above, it can be seen that Harry did not really pay his way in any meaningful financial sense, though the value of happiness is of course inestimable!

A few quick sums: a lamb finished on grass for meat will fetch around £60-80 at present, the fleece if processed into yarn should earn double the cost of the processing or the wool can be sold at an average of around £2 per kilogram this year (probably 2-3kg from most adult sheep on average, and of course this is once a year for life, twice for longwool sheep), and a skin will cost £25-40 for tanning and then can be sold for double that,  or more if particularly attractive.  All of this is in addition to any income from sales of breeding stock, and the savings and contribution in land management and reduced inputs of pesticides on mixed farms.