It seems to get harder to slaughter sheep the longer I keep them.  Breeding lamb meat for early slaughter is straightforward because that’s what they are for and they rarely have names (the last ones were called Chump and Chops, though in fact they are currently growing wool for a friend instead!).  But there comes a time when you cannot wait any longer unless they are truly a pet.

So, on 22nd September, David (above), Jonathan (below) and Sally (below Jonathan) went “down the road” to Lobbs, the respectful and caring slaughter house at Ruthern Bridge.  They are now back from hanging and butchering by Kittows and in the freezer, while their skins are delivered to Devonia for tanning.  This means that one thinks about them for a good three-to-four weeks after doing the actual deed, to collect and salt the skins, discuss the meat cutting order and so on. 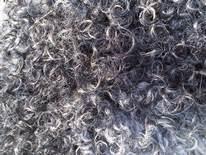 David had a finer fleece than Jonathan, but Jonathan had useful primitive body and head characteristics.  Both were very tame and Jonathan in particular would wag his tail when his chest was rubbed – most sheep like their chests rubbed and it’s a better approach than patting their heads, which for a ram is not a good idea – so many people pat a sheep’s head as if it were a dog, but they actually fight with their heads, so this is really not the best way. 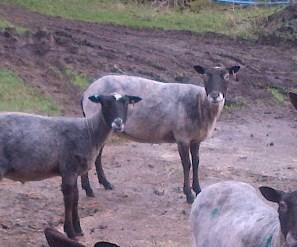 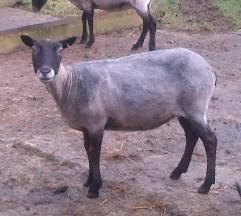 I had less pictures of Sally, as indeed of all the ewes, as they work and live much more as a group and less as individuals.  Some have strong personalities, and can be downright obstreperous, but mostly they are quiet, a little shy and part of the flock.  Sally was bred by me in 2007, sold to West Cornwall and later bought back and, although her fleece was not the best, her temperament was good and she has bred some lovely lambs.

People  here seem able to cope with legs and mince, so I focus on that, rather than other joints like shoulders, although we do also have the livers and the loin fillets, which are lovely.  Quite a lot of the mince goes to our local pub for shepherds pie.

One reason it’s harder is because I bred these sheep and have brought them up to work at producing lambs for the future.  David has arounnd 90 lambs in the USA as we exported his semen while his sons Sonny and Thor are now working near Axminster and in north  Cornwall.  Jonathan has lambs throughout the south west and his son Jonsson will be working to carry forward the blood line this autumn.  Sally had to go because she was quite closely related to some of the rams and lambs.

So now I have 16 boys: five wethers and 11 young rams; and 7 girls: three ewes and four ewe lambs.  The ewes are off to the Isle of Wight, in lamb to Jonsson, in December while the ewe lambs will go to the Tamar Valley sometime in the next few weeks where next year they will work to produce coloured wool with Wensleydales.  The boys will stay on with me to see how they turn out – a ram is not really able to be assessed until around a year old.  I can already tell that some will be wool producers only though …