It’s on the cards: about our Carding Machines

It’s on the cards: about our Carding Machines 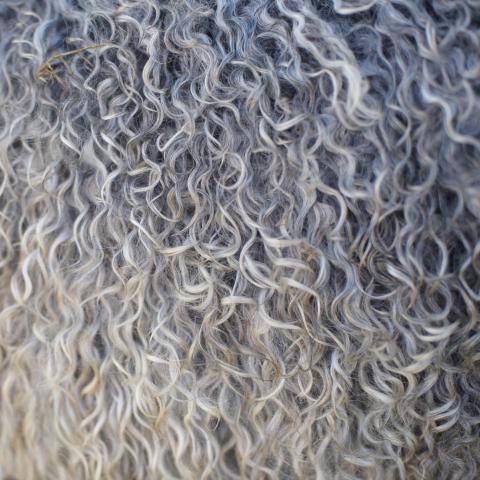 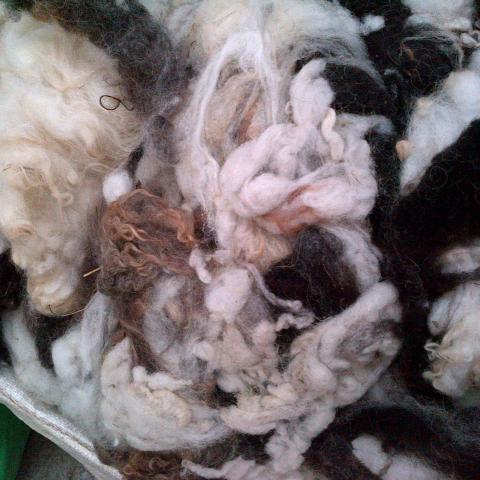 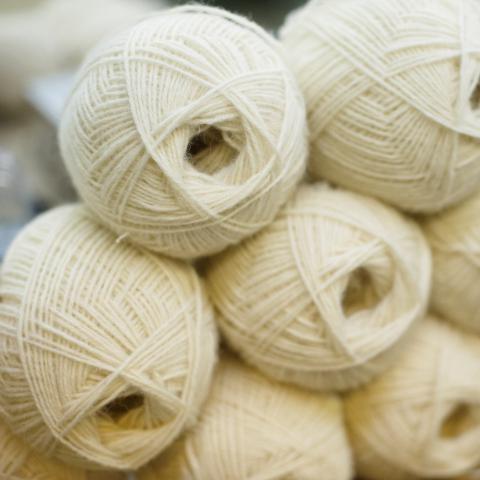 An integral part of all yarns is carding; without it the fibre simply can’t be made into anything useful.  It’s a bit like brushing your hair, if you do it well then it looks lovely, if you don’t do it, or do it badly, it looks tangled, flat and uneven.  So the card separates and spreads out all the fibres to enable them to be re-assembled into an even yarn.

In our mill we have two Carding Machines or Sets (aptly named ‘Card 1’ and ‘Card 2’…sometimes we wonder at our own creativity), the great thing about running two is that we can keep both the woollen and worsted frames busy with fibre without too many stops and starts. We can also do white on one, dark on the other or separate organic from non organic.  The carding machines are slightly different, with Card 1 more suitable for finer fibres and Card 2 slightly better for coarser longer fibres, which also extends the range we can process.  This is Card 2 seen from our mezzanine floor (photo by Lara). 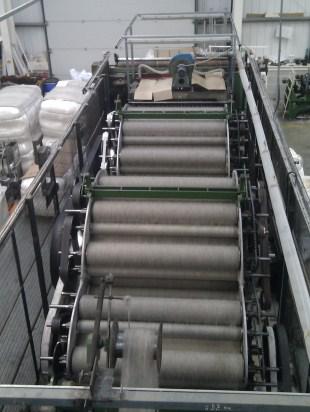 Carders come in various sizes, from sample to several metres wide in large carpet yarn mills.  Ours are 5′ wide and roughly 40′ in length making them small-medium in the woollen mill world.  Those of you who have drum carders at home will notice the similarities; a drum carder is just a much smaller version, with fewer rollers.  Ours are powered from the mains, not by hand (thankfully!).  They have leather driving belts and intricate gear systems which enable them to be adjusted to suit each fibre type and are very little changed since the originals were part of the Industrial Revolution. 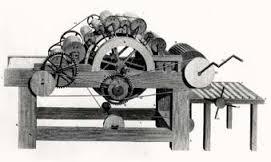 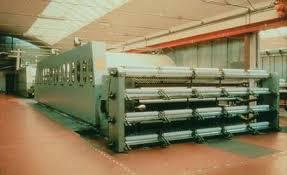 The truth is, that technology for carding hasn’t changed much in the past 200 years as it is simple and effective; modern mechanisation has reduced the amount of human input needed so our Carding Engineer, James, can run both cards simultaneously.  Electronic weighing of the input ensures the correct amount of fibre flows into the card to make each specification of yarn, which increases the accuracy and effectiveness of the machinery.

So, how do carders work, exactly?  The image below shows a simplified side-on cross-section of a carder.

The fibre, which has already been scoured, dried and teased so that it is clean, with dirt and grease removed, and in effect is a big bag of fluff, is fed from the feed hopper into the nippers which turn towards one another, helping push the fibre to the swift (the main roller), which lives up to its name. All the following pictures of the carding process were taken by Paul, our previous Mill Manager. 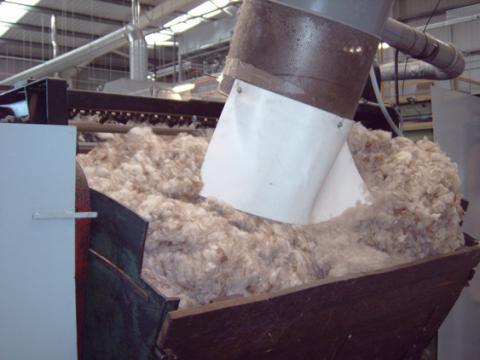 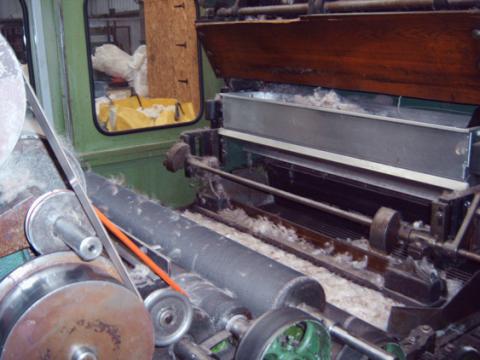 Pairs of slower, but differently speeding Workers and Strippers alternately pull the fibre off and onto the Swift (which is hidden behind them) and gradually create a uniform web both across its width and along its length.  Swifts generally have between three and five pairs of Workers and Strippers, depending on the size and purpose. 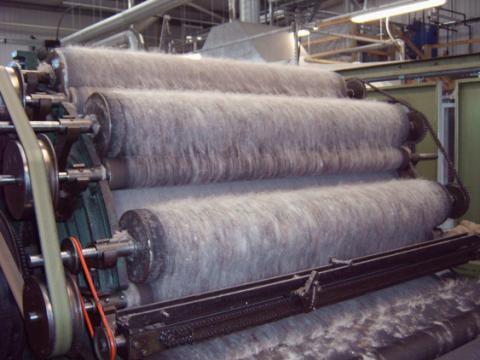 At the end of each Swift, there are a Fancy, a Doffer and a Fly Comb, which brush off and collect the fibre ready to go to the next stage of its journey. 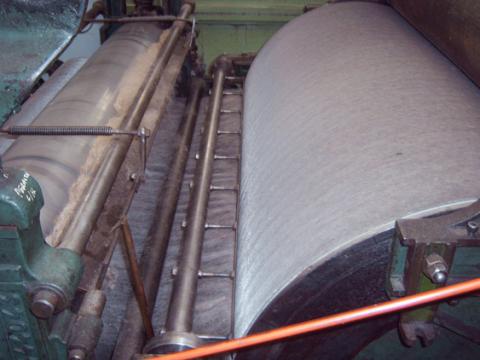 A large carding set is in two parts, first the Scribbler which can create batts and rovings, and then the Card  which evens out the web ready to split into slubbings to feed a woollen spinning frame.  Each part has two Swifts, with the associated feeds, Workers, Strippers, Fancy and Doffer.  Between the two, the Peralta crushes out vegetation and seeds and the Scotch Feed transfers from the Scribbler to the Card while also turning the fibre flow by 90 degrees to spread it out further and more evenly. 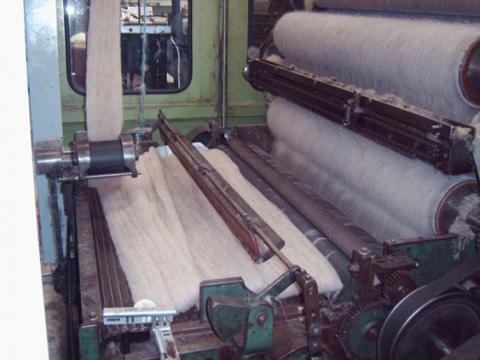 Then the web is divided by the Calendar Rollers and run between Rubbing Rollers to create the slubbings. 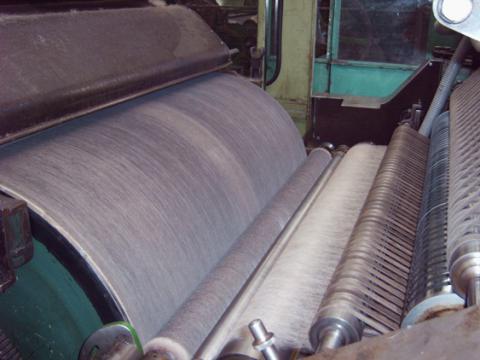 These slubbings are what we make the yarn from on the spinning frame.  They are rolled gently onto bobbins over large wooden rollers. 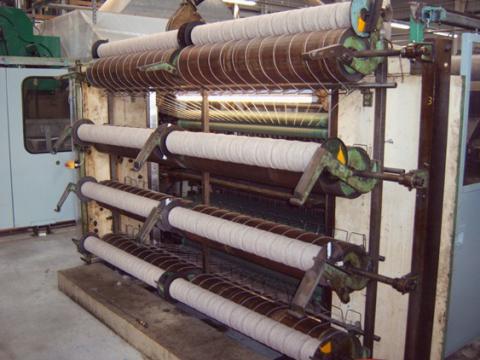 Once the bobbins are full, they are loaded onto carts for their short journey to the woollen spinning frame. 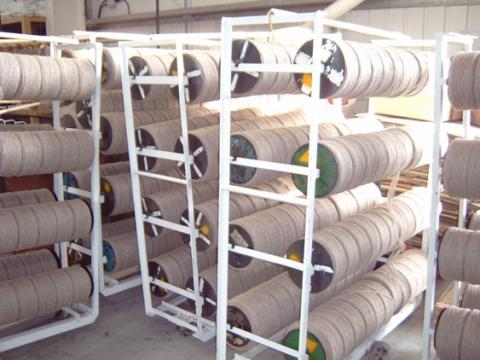 This completes the preparation of fibre for woollen spun or CARDED yarns.

Watch out for the next instalments on preparing fibre for carding and on worsted spun or  COMBED yarns!

PrevPreviousMore on Wool and Linen: the poetic and specific aspects of Lyonesse
NextLeaving Gatsby behind at the fieldNext