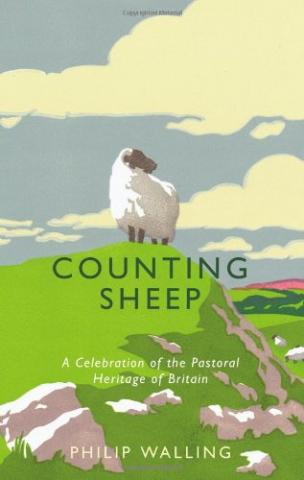 I saw a review of this book in a newspaper (probably The Times) and thought it might be interesting and I was right!  The publishers kindly sent me a review copy and, unlike a standard reviewer, I have read it from cover to cover.  I really like this book and recommend it to anyone wanting to know more about sheep and their relationship with us over time and across the land – it is accessibly and entertainingly written while still putting over a great deal of information in a usefully structured way.

The book is a celebration of sheep in the British landscape over the last couple of millennia and is a “double entendu” title in that it is about how many sheep there are, but also about how important they have been to the landscape, economy and society.  Perhaps the most interesting thing is that this is still going on – this book is not just about the past but also about the present.

Unlike with the more weighty tomes on the subject, Philip manages to carry his knowledge relatively lightly and is well qualified in that he farmed Herdwick and commercial sheep for many years in Cumbria and then researched this well indexed book in great detail over several years.

– the various sheep breeds are each the subject of a chapter, and he also looks at dogs and the current situation and trends for the future (pessimistically)

– for each breed, he has visited a farm and gone into the history in detail but also the current experience of farming with these particular animals

– although the chapters focus on the breeds and their development and are generally in chronological order of development, Philip manages to cover a very wide number of other topics, ranging from the delightful and touching story of his lame (and typically nameless) Herdwick ewe and her amazing ability to continue finding rams and lambing, to discussions of “mothering up”, or which breeds have horns and why, of the importance of the annual seasonal and quarter day calendar to sheep farming, or of scrapie (on which his views are interesting), or how auction markets work.  These are scattered appropriately through the book and he obviously needed to include them in order to give life to his passion

– the description of the “sheep pyramid”, whereby pure-bred mountain ewes are first crossed with pure-bred rams such as Blue-faced Leicester, Teeswater or other similar breeds, and the progeny crossed again with meatier animals such as Texel or Suffolk, in order to create large and fast-growing lambs for the urban meat-eating markets – but also how even the great Robert Bakewell, innovator of the meaty sheep, still preferred more slow-growing meat for his own table

– some things were not completely accurate or current, but I am probably quibbling in that I found nothing sufficient to be mis-leading

Philip Walling is not sanguine about the future of sheep farming, due to threats he identifies:

– increased “industrialisation” of production meaning standardisation of breeds, risking a mono-culture in sheep as well as in grass, or the need to diversify (for example into cheese – but why not wool?) to survive

Interestingly these are probably the results and the reactions to the inevitable consequences of the 17th century rush to create meat sheep in England (and wool sheep in Australia and wool/meat in New Zealand).  And these changes were themselves the result of increased urbanisation and population growth as technology permitted us to feed more people.  The result of the improved meat sheep, epitomised by the Dishley Leicester, was to destroy the quality of wool, possibly most seen in the poor Ryeland, whose fleece, although nice, is no longer the “Lemster ore” of Tudor times.  Perhaps it is time, along with the breed societies, supporters of coloured wool sheep and rare breed preservation programmes, to look for greater diversity, for quality and for the importance of disease resistance natural to native, regional breeds?  Sheep and farmers have adapted in the past, many times, and can do so again, possibly to a more balanced range of husbandry styles.

I can add to this from my own experience as I was at the 8th World Congress of Coloured Sheep earlier this week (usefully accessible in Paris!).  When I was preparing my presentation, I heard from Dawie du Toit, the chair of the organising group, that big meat sheep are now taking over from native breeds in South Africa, but have to be kept in and/or dosed to the eyeballs as they have no immunity to the local pests and diseases, which the acclimatised native sheep have developed over many years.  This is not useful!

I think we all need to consider this and what we can do about it as consumers, farmers, etc., whether vegetarian or carnivore, as we are losing bio diversity in farm animals quite quickly, not just in the rain forests!  I do recommend this book and it is quite thought provoking as well as a labour of love.

Published by Profile Books, the ISBN is 978 1846685040 and, if you don’t have a book-shop or library you will no doubt find it, along with nearly everything else, on Amazon – unless you are boycotting them?