The Cornish Garden Yarn Part One: the very special Merino and fine wool in our 14th Birthday Yarn

The Cornish Garden Yarn Part One: the very special Merino and fine wool in our 14th Birthday Yarn

We have used English Merino and Romney wool as the fine wool components in this year’s Birthday Yarn.

Some, but not all of the Merino in this blend comes from a flock which is now no more.  The last of Annabelle Spencer’s Falkland Merino sheep died at the grand old age of 19 last year.  We have been buying Annabelle’s Merino for over seven years and knew that as the 12 sheep, around 10- 12 years old when we started, became fewer and always a year older, this special source of wool would eventually, literally, die out.

Annabelle told me that her last lady disdained to associate with younger sheep from next door, brought in for company to ensure she was not lonely, and instead spent her last months mainly in the barn, going out for an evening walk with Annabelle each day.

We made some English Merino yarns from this wool in 2011 and 2013, in DK and Aran, in a fawny-grey colour, as this flock, unusually, also included naturally coloured Merino sheep.  We dyed some of it olive and blue.

Since then, knowing that we would get less over time, we have hoarded the wool.  So the Cornish Garden limited edition batch of 300kg contains the last 20kg of Annabelle’s coloured Merino, along with about the same amount of white Merino from Michael Churchhouse of the Sheer Sheep experience.  You can guess who is who in the photos below! 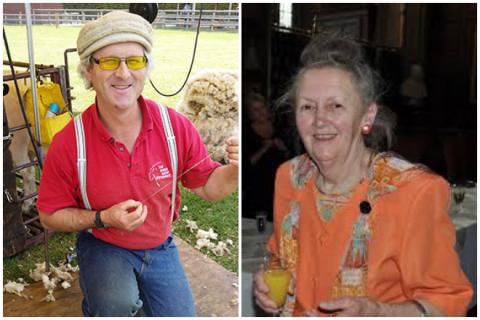 Annabelle came back from the Falkland Islands, with her sheep, and Brian, now her partner, in 1986 and they set up the Falkland Islands Agency shop in Wells.  The Agency is next door to the original Spencer shop and was opened in 1987 by Sir Rex Hunt, the governor of the Falkland Islands.  It is devoted to an exhibition of historic and contemporary Falkland Island goods, crafts and information.  The grocery shop is a totally traditional village shop of the old style, selling everything from local ham and delicatessen goods to boiled sweets and, of course, knitting yarns.   We used to supply Annabelle with natural white aran Falkland Island hand knitting yarn which she also took to some craft shows.

Brian died in 2003, since when Annabelle has continued to run the Agency and shop.  Opening times are now by appointment as Annabelle does not have the energy to manage all hours – the shop is usually still open around 30 hours a week.

In keeping with our birthday tradition of many fibres in the blend, the rest of the fine white wool in our Garden, another 80kg or so, comes from Mike Blake’s Exmoor Horn/Merino cross bred sheep  at North Ash Wool , along with a very little fine Romney from Sophie Arlott  of Lavinton Lamb, plus a little Bowmont from Agnes Gough in Scotland.  The Tor 13th Birthday yarn also included some fleeces from Mike Blake, using the more Exmoor of his crossbred sheep.

Although Romney seem to be happy the world over, Merino sheep are not the happiest in the UK climate, so it is a tribute to Annabelle, Michael and Mike and also to Sophie for the quality of her Romney fleeces, that they are producing good quality fine wool here and we are honoured to include their fleeces in Cornish Garden.  Here is a sneak preview of the natural shade plus one dyed shade.